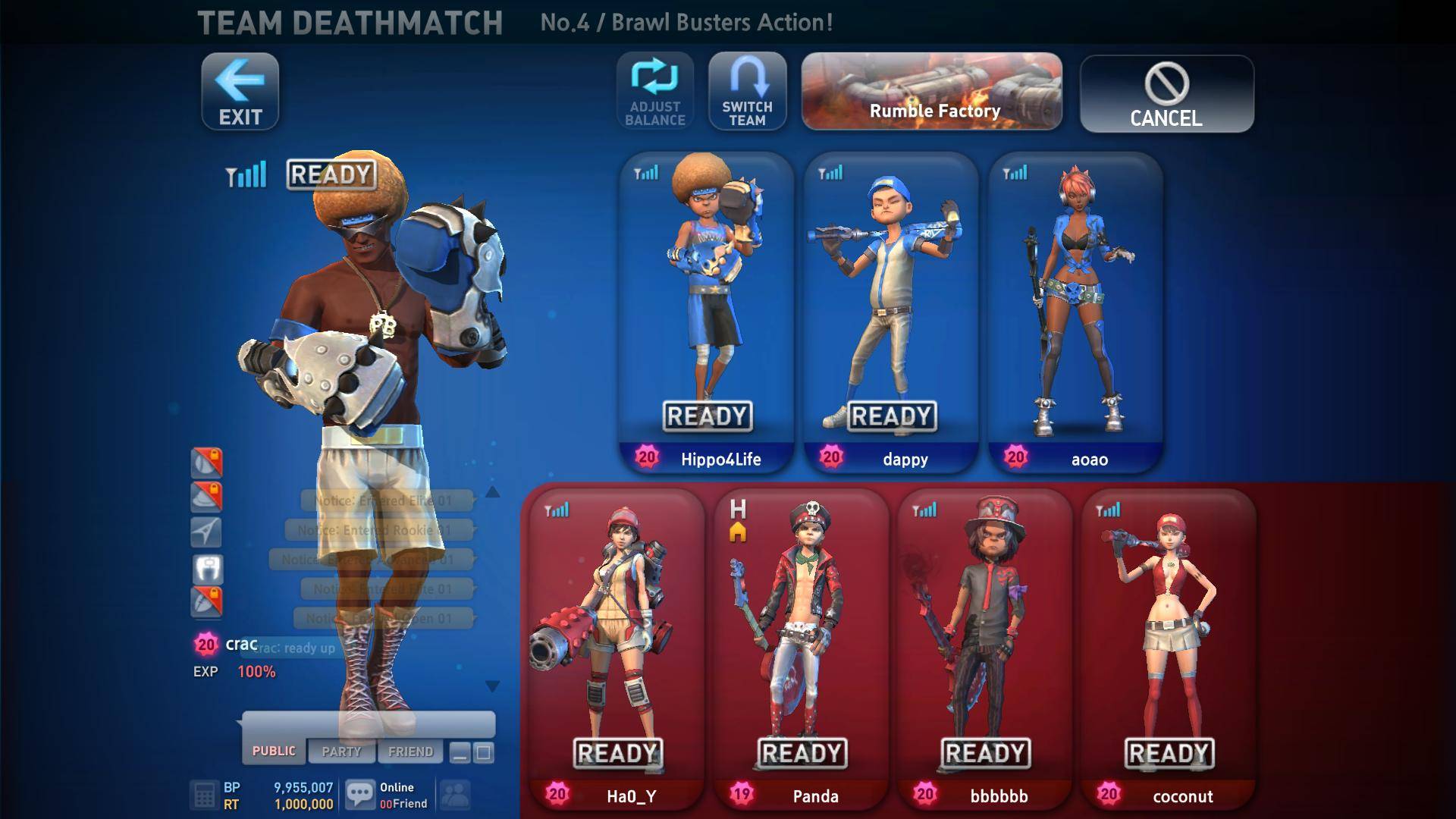 Brawl Busters is an action fighting MMO with an innovative gameplay and a crazy style. Compete against thousands other players choosing one of the 5 different and unique classes: Boxer, Firefighter, Rocker, Slugger, Blitzer. With its action-packed gameplay and its numerous game modes such as free for all, team deathmatch, glow rush, co-op zombie survival and single player, you will never get bored.

Firefighter - The firefighter uses a Fire Hose to spray nearby opponents with a powerful blast of water. Slow-moving Firefighters have a high HP rating and their Secondary Attack has the longest range in the game. Their Special Attack creates a temporary defensive barrier.

Boxer - Boxers are the fastest Busters but also have the lowest HP rating. They use Boxing Gloves to throw powerful punches or charge at opponents fist-first as their Secondary Attack. The Special Attack is a wind-up punch which launches flaming gloves damaging opponents in front of a Boxer.

Slugger - Wielding a Baseball Bat, Sluggers are effective long-range fighters. They can either swing wildly at their enemies or launch deadly guided baseballs as their Secondary Attack. A Slugger's Special Attack, one of the strongest in the game, drives a super-charged baseball at the enemy team.

Blitzer - Blitzers, with the highest HP rating, are great at fighting multiple enemies. Armed with the football, they tackle their way through opponents or perform a touchdown move as the secondary attack. The special attack lunges them forward in a spin-move followed by a powerful slam.

Rocker - Rockers have a high movement rating and are great all-around combatants. They can either swing their Guitar for deadly combos, or strike stunning musical chords for their Secondary Attack. The Rocker's area of effect Special Attack clears out opponents in a flash.

Singleplayer - In this mode you can find some tutorial missions that will help you to learn the game mechanics and familiarize with the gameplay.

Zombie Survival - Up to 4 players will have to face pack of zombies in this fast-paced co-op mode.

Glow Rush - Two team will fight to get the valuable Glow.

Team Deathmatch - The classic Squad vs Squad fight. Fight with your teammates and kill’em all.

Free For All - In this mode you’ll be alone against everyone. Kill or be Killed.