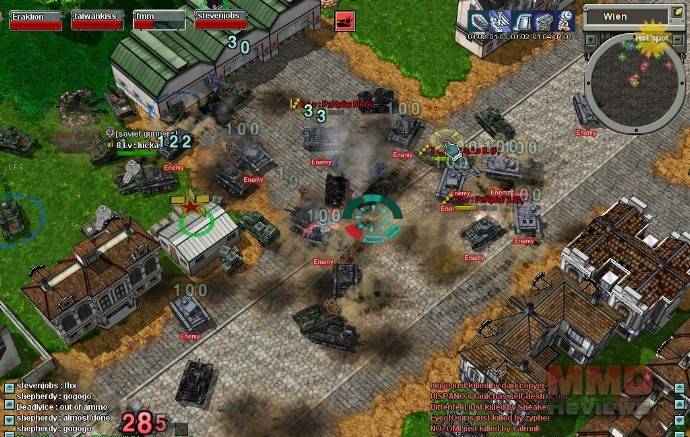 Developed by Efusion for Windows.

Blitz1941 is a MMO tank simulation game based on the German-Soviet conflict during World War II. Use one of over 60 different tanks, fight against other players and occupy the enemy’s cities. Up to 3000 players per server can engage in large-scale combat operations at the same time.

In Blitz1941, there are over 60 different kinds of tanks. These tanks were all used by the German and Russian armies during World War II. If you gain a victory against your opponents, then you will get Exp, Bonus, Contribution, and Money. As get it, you can promote a tank commander character (an avatar). And you can also gain a combat skill, and purchase stronger tanks to increase your ranking in your country. You can buy a reinforcing item for your tanks. Unlike usual P2P games, where a player creates a room and plays against another player, Blitz1941 allows you to enter and exit easily an international battlefield (composed of 15 cities in Europe) in real time and places you into tense combat against other players to occupy a city. The winner can occupy the city and get the advantage of an economy area and the supply of needed materials.

If you improve your own tank with reinforcing items, then your tank can be more effective in combat and have different characteristics from the other player’s tanks. Perhaps you need to operate your tank properly and shoot an enemy’s tanks accurately in one-to-one combat, but you should try to make strategies to cooperate with same team’s tank units in large-scale tank combat, where over 200 tanks are simultaneously used in combat operations.

The cities are identified as either a metropolitan city, a small city, a munitions city, or a commercial city, according to characteristics of it. The structure, size, and feature of the levels of each characteristic are expressed differently. Roads connecting the cities will be configured to enable combat on the roads. Since 3D graphics can illustrate tactical movements, tank firing, and the geography of the area, players can play many different games according to geographical features.

The different levels of Blitz 1941 show different geographical features and architectural styles for each city and country. All the cultural elements and unique architecture of the cities are meticulously represented in the game to recreate Europe during World War II. Blitz 1941 illustrates hilly land, hillocks, low-lying areas, rivers, and artificial structures (e.g. bridges). The background has been beautifully recreated through real terrain processing so players can use the land tactically in combat.

Germany and Soviet Union are available in Blitz1941 Online. Choose one of the two nations before making a tank commander. Choose your Nation carefully because it is not possible to change the nation without deleting your tank commander.