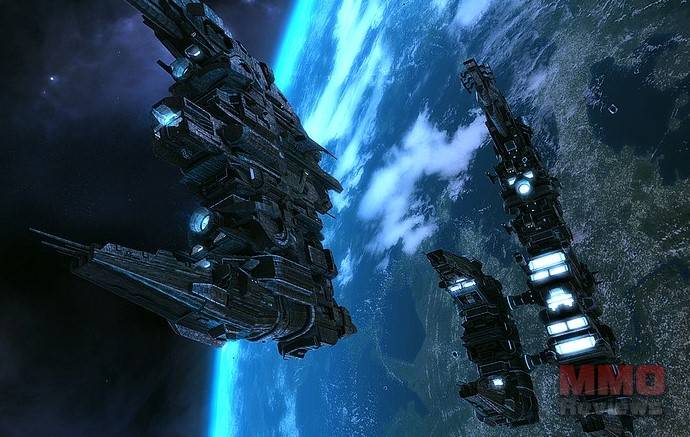 In the 26th century, mankind has expanded across the galaxy, yet only few of its colonies are controlled by Humans. The true rulers are the cybernetically enhanced Tyi and the biogenetically perfected Genides. Their striving for total control over all human species drives them into the territory of an ancient alien race that does not tolerate other cosmic civilisations: the “Restorers”.

To survive this war and uncover the motives of the alien’s destructive behaviour, you are forced to join one of the two dominant human races. Their search for the origin of the Restorers becomes a race for survival of all three human species.

Fast-paced action combat
Black Prophecy is more action-oriented than a traditional space simulation. We are trying to avoid long travel times or other activities where the player isn't really doing anything.

Modular ship design
Player ships are not sold as whole, but instead consist of modules like cockpits, wings, engines etc. All these modules are available in different shapes and sizes, which allows the players to customize their ships.

Item modification system
In addition to the modular ship design, players can also further customize their ships by adding modifications to their ship's modules and weapons.

Resource system
Clans can fight each other to conquer resource stations.

Award and medal system
Similar to an achievement system, players can earn medals and awards for performing specific tasks.

Tyi
The Tyi-protectors were created after the first species wars and are the second superhuman species besides the Genides. Contrary to their genetically manipulated arch-enemies, they have completely devoted their bodies to cybernetics (at first as part of the project, later of their own will).

Genides
The graceful Genides were the first of the two new human species to be created on Sabiador. They need virtually no sleep, their wounds heal quickly and they are capable of telepathic communication. Most of them are also resistant to illness, their thought processes are faster, they can hear in ultrasonic and infrasonic frequencies and have a long life expectancy.