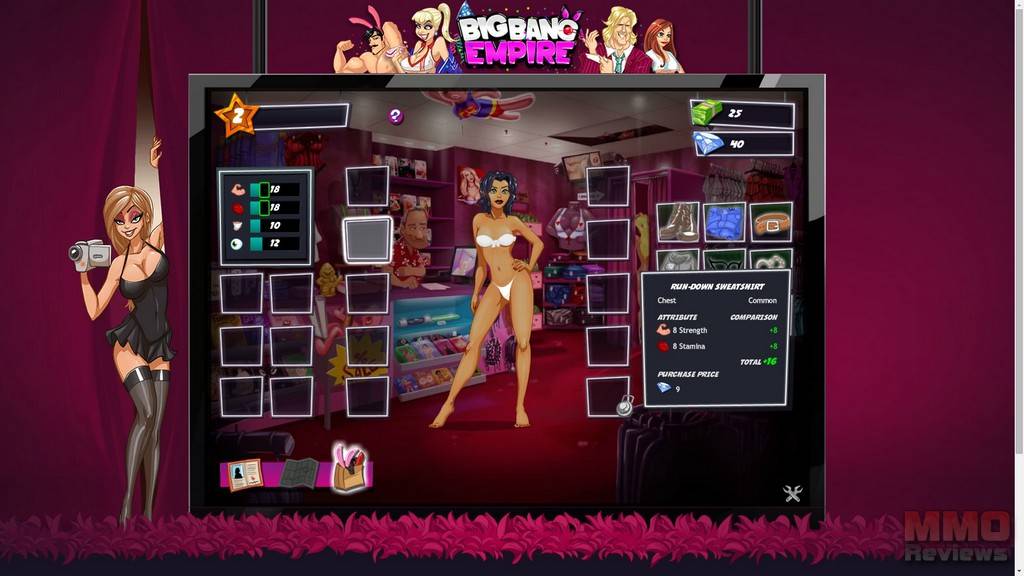 At its heart this RPG focuses on time and resource management where players must try to increase their own characters performance by purchasing new items, which requires currency, which can be gained through various features. Simultaneously players can only conduct one activity at a time, meaning they must prioritise which resources they may be lacking most and which features they do wish to focus on to replenish those needed resources. All actions take time, which can either take a few minutes, a few hours or even longer, however players can conduct some activities and then go off-line whilst their character continues them passively.

Players will continue to customise their character throughout the duration of the game, whilst there appearance is purely cosmetic and can be changed by spending cash to put your character under the knife, the primary way to customise them is through their choice of clothing and gear and accessories. When first starting out choice of clothing items is slim and generally of a low quality (though players can occasionally get rare items randomly), as players level up and spend Diamonds (the premium currency in the game) to check out the new gear they will gain access to higher quality and sexier clothing more appropriate to an adult entertainer.

All players for different attributes for their character: Stamina to determine their hit points, Strength that helps them deal more damage in combat, Finesse that enables them to dodge attacks and Charisma that allows them to perform critical strikes to deal more damage. Players can increase these Attributes when they level up, by training, by unlocking achievements, equipping new upgraded gear or simply by spending cash in game currency.

Combat takes a very central role in the game be it in PVP against other real-world players, competing for Glory and PVP ranking, or in PVE completing missions and exploring the story driven content.

Missions come in a variety of formats, most notably are timed missions where players simply and then after a specific number of minutes or hours the missions are sat at the completed and the player gains the rewards for it. Combat missions work similar to begin with where players must wait an amount of time, but then they must also defeat and AI opponent to complete the mission.