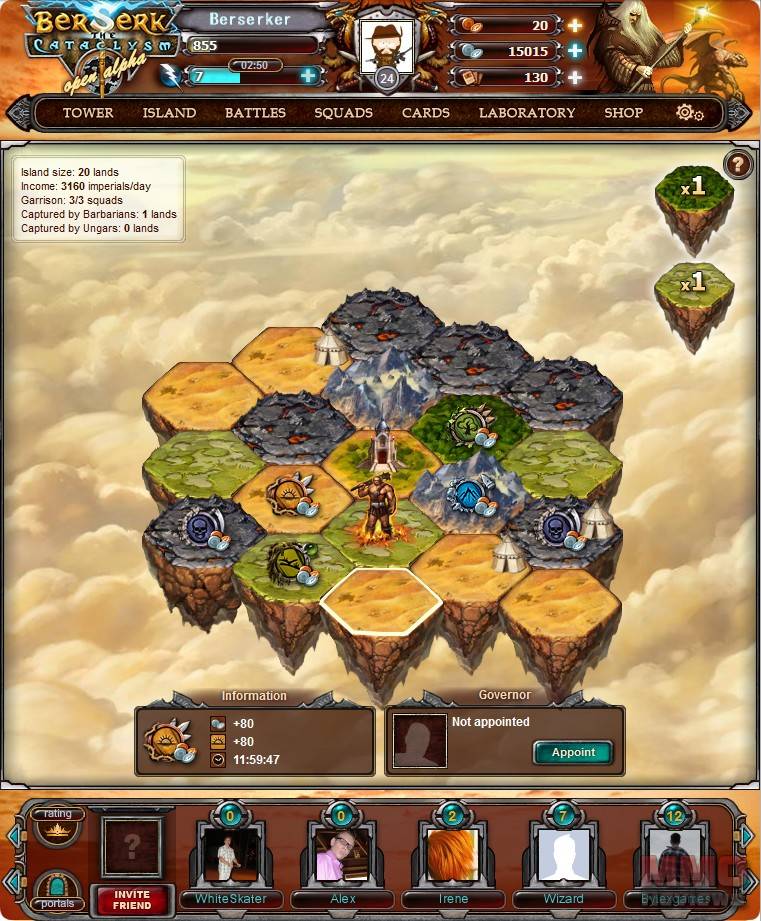 Berserk: The Cataclysm is a challenging MMO that allows players to use their own strategy and tactics to build game winning mini decks known as Squads in exciting and highly addictive combat. Players can advance through the various PVE story driven campaigns or test their mettle against other players in the hopes of earning glory and gain. Berserk: The Cataclysm is available on multiple platforms including web browser as well as accessible through Facebook and is all completely free to play.

Berserk: The Cataclysm allows players to go head-to-head with AI and other player opponents using an automated combat system where the strategy of the game lies in building effective Squads, small seven card decks (though in some games players can use more than one Squad in a battle) from their acquired cards. Players can level up to unlock new features, progress through story PVE content campaigns as well as acquire land in a unique feature that allows them to acquire resources to spend in the game and they must defend these lands from other attacking players who can try to steal them.

The basic premise of the game is that players fight their opponents with cards made up from five different Elemental groups: Mountains, Darkness, Plains, Forests and Swamps, from these cards they can build a Squad made up of seven cards from the same element. Every card has its own hit point value, attack damage and a number which signifies how many rounds must pass before that particular card can join the battlefield.

The combat is completely automated and once a battle begins the cards that are drawn from the players chosen Squads are done so in a random order (though with typically only a handful of Squads in a battle players often no which of their cards will be drawn just not the order). Once a card is drawn it must wait until the number of rounds that have passed are equal to its Turn value and they will automatically enter the battlefield been placed on the players battle line, a row made up of seven available positions and a card is instantly placed in the first available position from left to right and they are filled in order.

At the end of each turn the cards deal damage equal to their Attack value to either the card that is in front of it or, if there is no card in front of it, directly to the players Leadership hit point pool. Many cards have unique abilities such as being able to shield other cards, damaging cards as soon as they enter the battle, auto moving around the battlefield switching positions and more options that further add to the strategy of the game. If a player manages to reduce their opponents Leadership value to 0 or destroyed all their cards then they are declared the victor.

Players can gain access to new cards typically through acquiring Imperials, the in game currency, and purchasing various Booster Packs from the in game shop. Players have various options such as buying a standard Booster Pack to gain three new cards or paying extra to gain three new cards of a specific Element. Alternatively players can purchase new Squads giving them access to Squad Leader cards that they can then modify and customise to add in their new cards and build a brand-new Squad for that particular Element. As the game is free to play players can purchase these cards simply by acquiring the currency through playing or players can purchase Imperials using real-world money if they do not wish to spend the time playing and building up their decks more slowly.