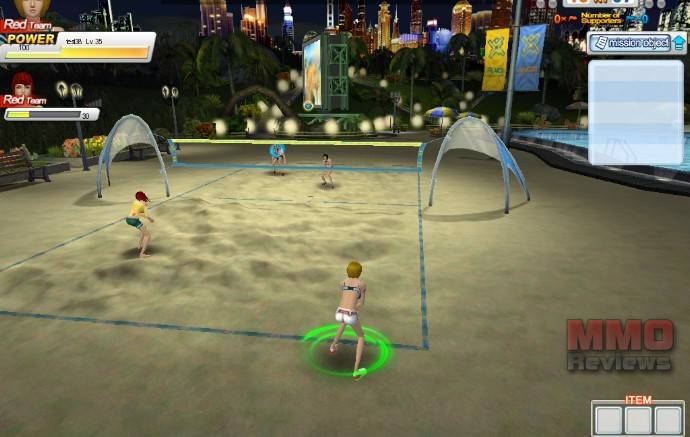 Beach Volleyball Online is a free to play 3D world set in a lush beach side environment. The world incorporates a friendly community with numerous areas to explore combined with the intense competition and tactics of Beach Volleyball. Players can customize their avatars in thousands of ways while developing their characters and making new friends. Players can also improve their skills and increase attributes by gaining experience both on and off the volleyball court.

The advanced 3D engine technology immerses the player in a gorgeous and realistic Summer-time setting. Apart from the action on the court, players can also engage in a variety of activities – go for a swim, rock out in the nightclub, meet new people using our public and private chat features, snuggle up with a special friend on the beach, even collect seashells - all the while gaining points and experience.

In the Volleyball aspect of the game, there are two styles of gameplay – realistic, competitive beach volleyball, and a more fantasy version of the game. Each style of gameplay has a variety of different modes. Pick-up games, as well as organized league play are both supported by the system.

Realistic style
In the realistic style of Beach Volleyball Online, players can experience the competition and depth of beach volleyball, and will use a variety of classic tactics and strategies.

Both of these styles offer three modes of play:

One on One Training Mode
Player can create a carbon copy of their own character to practice and build up their skill.

Audience Betting Mode
Some players will choose to allow their games to be open to a public audience. When this happens, spectators will be allowed to watch the game, and place bets on the winning team. Those who win their bets will be rewarded by the system. Winning team members will also get a small percentage of the award.

The first step is to create an Avatar. Player avatars can be male or female, with a large number of customization features available for each. Customization features include body size, skin tone, hairstyle and hair color, hometown, etc. In addition, each player must choose a “class” for their avatar. The three classes are: offensive, defensive, and strategic. Each has its own strengths and weaknesses, as well as unique attributes that will aid the character throughout the game.

Characters can advance to higher levels by gaining experience, and can be customized and enhanced in thousands of ways from the BVO item mall. Many items are free, and all can be purchased with game points. Game points can be acquired either by spending time in the game or can be purchased immediately. Most apparel can enhance a players attributes in one way or another. Different grades of clothing can vary by attributes, color, and look. Some items can be enhanced with advanced features. When characters are upgraded, basic attributes will be enhanced and player's skills and abilities will become more advanced.

When creating a new character, the player must choose one of the three classes in the game. These are Offensive, Defensive, and Strategic. Which class to choose is up to the player – each has different characteristics and attributes. It's a good idea to choose the class that best compliments your own playing ability. The various classes have the following attributes: Serving, receiving, setting, spiking, blocking, strength, and ball control

Offensive
Players choosing a character of the offensive class will be better at offense. They will be strong on the serve and good at spiking opponents. Although offensive players generally have higher power than other classes, their defensive ability is not as good. As the player's level increases, offensive players tend to grow rapidly in the power, spiking and serving attributes, while growing more slowly in others.

Defensive
Naturally, players choosing the defensive class will be better on defense. Defensive players are better at receiving serves and blocking spikes. They are also better passers. As defensive players gain higher levels, they rapidly gain blocking, receiving, and setting attributes, while growing more slowly in others.

Community is a main theme of Beach Volleyball Online. It's easy to make friends in the BVO world. Different areas provide a wide variety of activities – on the beach, in the nightclub, watching a game, etc. These activities all provide great opportunities for social interaction, and include public and private chat systems, mini-games, the chance to explore the game's robust interactive environment, a lottery system, and the chance to build your own house or even your own theme park! The atmosphere is always changing, with new features and additions to be implemented on a regular basis. Most activities in the game will earn game points and develop the player's character.