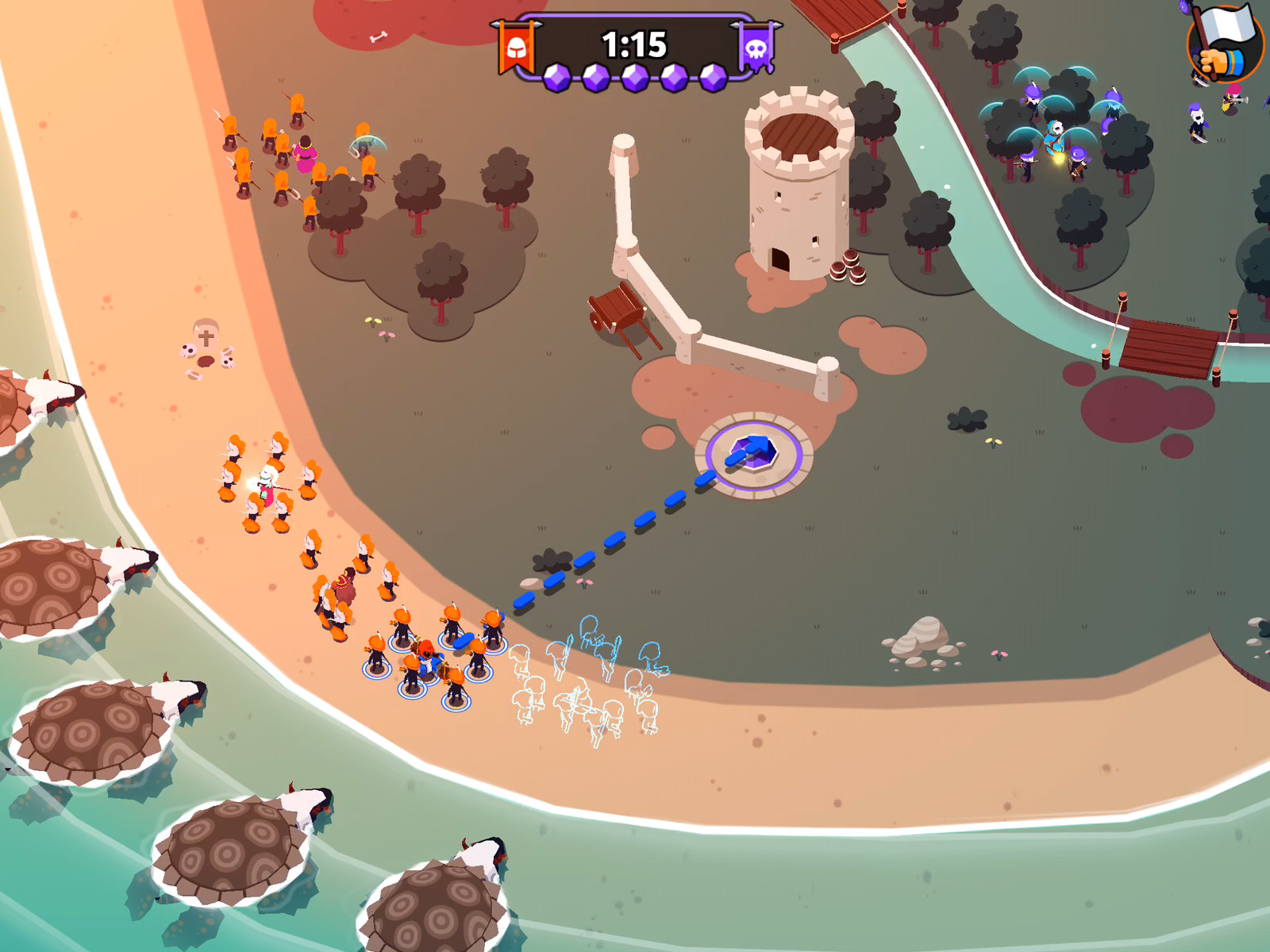 Battleplans is a free to play fantasy themed real time strategy available on mobile devices. In it, players control fantasy heroes attempting to retake the land from the evil Skulls in tactical combat battles through a story based campaign and defending lands from other players.

The game is broken down into a PVE campaign battling against the AI to reclaim territory from them and then defending it from other players whilst simultaneously attacking them in real time combat where with intuitive touch screen controls players move their units around a map area trying to defeat the enemy. The primary objective in each attack is to try and capture different points scattered across the map and defended by the AI or rival player forces, with three capture points players must reach them within the match time limit and stand on them to convert them; if a player controls two of the three points when the time runs out then they win the match; controlling the third grants even more rewards.

Starting with a single hero, Balthor, players must progress the campaign mode where they will discover new Heroes that have been captured by the Skulls; rescue these Heroes and they will be eternally greatful and ready to assist a player in battle and become a new controllable Hero. In combat each Hero has a unique ability and can be independently moved around the battlefield along with their squad; defending points and positions, or attack the enemy. Some Heroes are:

Taigar - A mystical ranger and the third character unlocked through the campaign, her primary ability increases her and her troops passive armor in a forested area on the map, which is maintained for a time when she leaves the forest. As she levels up she is the first hero to gain an active ability called the Mystical Stag that allows her to summon a battle companion

Pepper - A fire mage with powerful AoE Fireball attacks that can clear a path for an attacking force by dragging the move arrow onto the enemy squad and launching a huge AoE that will damage both enemy and friendly units in a large area. Defensively players can move Peper's fireball around as an object during the planning screen to set the location of the fireball impact as well as the delay that it is cast at (min 25s)

Each Hero controls a variety of troop units that move with them in combat, able to offer additional combat support and hitpoints to the Hero, the troops come in a variety of types and it is up to the player to decide on the squad composition and which troops will best suit different heroes and their own battle plans. The core troops are: Serfs, Sentries, Knights, Archers, Soldiers and Brutes:

Archers - Simple but deadly ranged attackers, they make reaching a defended position extremely hard and are great for taking out melee units before they get close

Sentries - Whilst Sentries are very fragile they are also the most deadly of troops as they ignore their opponent's armor rating, including those gained from forest bonuses, making them a glass cannon type tropo

There are various buildings that a player controls in their base that they can level up, this gives them access to resources such as using the mines for gold, allowing players to improve and upgrade their heroes’ skills and their troops, increase the number of troops in a squad and more.

Outside of the PVE campaign players can attack each other's settlements and defend themselves from rivals, with PVP becoming a big portion of the game. In an attack players will control their troops as normal, actively choosing where they go, where they attack and how. In defense mode the players sets up the position of their defending units, assigned automated patrol routes, and other tactics that will automatically happen during a defense without the players control; though they can review battles afterwards to see any holes in their defenses.