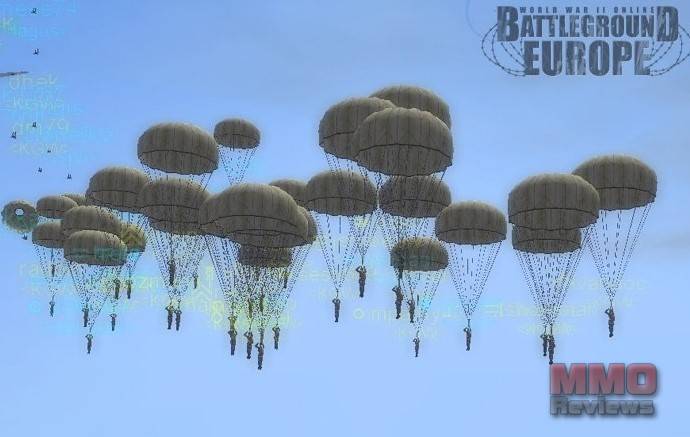 Developed by Cornered Rat Software and Playnet Inc. for Windows and Mac.

World War II Online: Battleground Europe is a massively multi-player online first-person shooter computer game (MMOFPS). The game is set in 1940-43 World War II Europe. It is a virtual battlefield, a combined arms war simulation. A player can command or crew a variety of accurately modeled aircraft, armored fighting vehicles, anti-tank guns, anti-aircraft artillery, and three naval vessels, or fight as a foot-soldier with a variety of infantry weapons. The game is played in real time alongside or against other players as German, British and French forces in a persistent world. Command structures and missions provide strategic and tactical layers while ranks provide a RPG layer by demonstrating leadership roles. WWIIOL online uses a ½ scale map of Western Europe with 30,000 km² of accurate terrain (800 m resolution satellite data).

The game is team-oriented. Players are various troops, pilots, gunners, tank commanders, naval destroyer captains, mission leaders, high commanders and are organized into brigades. Everyone plays in the brigade of their choice. Smaller military units of heavily-themed squads are independently managed by players and can use their own tactics but follow the brigade and strategic rules set by the high command players and cooperate with other squads and non-squad players. Being a squad member is optional but encouraged. Some squads have vigorous membership rites. Anyone can, however, form their own squad, solicit members and register the squad with the high command for brigade assignment.

The position of the front lines on the map is updated every 5 minutes on World War II Online's home pageEach player holds a title of rank, based on the military ranks of the time. Ranks are gained through a performance-based scoring system. Rank is never lost as a result of an unsuccessful mission or death.

There are two sides: Axis vs. Allied. The Axis consists of the German forces and the Allies are the combined British (UK) and French forces. The rest of Europe, the rest of the British Commonwealth, the United States, Soviet Union, China or Japan have not been introduced into the WW2 simulation yet. Players can choose to play Axis or Allies and may switch sides after waiting a mandatory period of fifteen minutes that begins when they resign from their current side.

Gameplay takes place in a single game world, which is a 1/2 scale map of Western Europe. It is the largest MMOG game world map, at over 350,000 km², with most play occurring in a 30,000 km² central area in which most capturable cities, airfields and ports have been placed. Two alternate servers are available for training events and beta testing the next version respectively.

The general organization of the forces is historical. SS units are excluded, along with all political elements (for example, the Nazi Party, the Gestapo and swastika).

There are three states of occupation through which a town progresses during the process of capture, they are termed "contention", "control" and "ownership". Much of the game's tactical, strategic and supply systems are dependent on these three states. You can use the "/own" command to see the status of your current town, or you can select a target on the map to query a specific town.

Contention
A town is said to be "Contested", "Contended" or "In Contention" when the enemy holds one or more of its facilities.

Control
At any given time, a town is said to be controlled by the side who last held all of the town's Armybase facilities. In a town with a single Armybase, this is clearcut - whomever holds the Armybase controls the town. In a town with multiple army bases, control can be non-obvious. If any Army Brigades are in a town when the other side takes control, they are routed and cannot return to the town until their side retakes control of the town.

The damage model in WWIIOL is realism based. Within the limits of modern technology, it simulates real world kinetic damage to the game world. Vehicle are modeled with their essential critical components, such as engine, fuel tanks, etc. The components interact as if they were the real machine. For example, a punctured fuel tank will cause loss of fuel which will eventually cause the engine to run out of fuel causing the engine to stop. Damaged components also provide feedback into the simulation model; For example, for aircraft, damage to flight surfaces will result in increased drag and reduced performance of the vehicle. Vehicles are modeled, within reasonable technical limits, to historically accurate detail.

Battleground Europe is just $14.99USD per month to play but you can save by switching to a pre-pay. By choosing a 12 month pre-paid subscription your can save almost $50.00USD a year. Click on 'I would like to modify my payment plan' from your subscription details page.