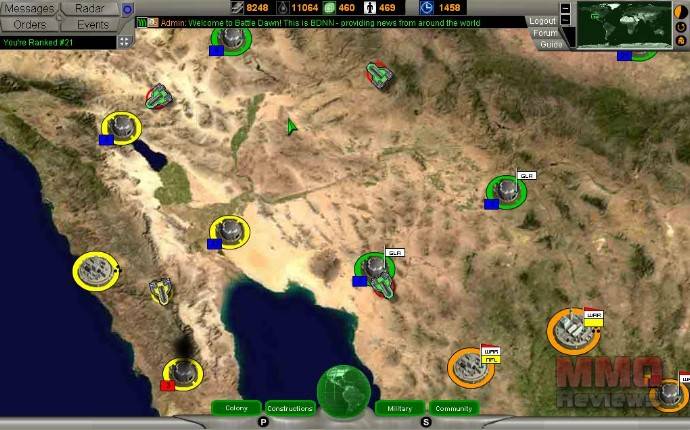 Battle Dawn is a browser MMO free to play strategic game for internet browsers. It highlights three types of flash worlds with thousands of real players. Also, it's turn based.

After a catastrophe, almost all civilization was wiped from the face of the earth. Now you, as the leader of a surviving group of people, must start to build your colony and strive for world domination as the strongest Colony on earth! Engage in battles, take over countries, gain trust among allies or backstab anyone who gets in your way. You are the leader of your colony, you make the calls, you decide your own fate.

Your goal is to ultimately become the strongest leader on the world, supreme to all others. Establish your colony, expand your borders, and build up a great army.

An alliance is a group of up to 24 players cooperating which each other.

Outposts are a strategic and important part of Battle Dawn. Without them one wouldn’t be able to get powerful or do much of anything. There are five upgrades you can perform on an outpost, these are: Settlement, Teleport Gate, Nuke Silo, Radar Post, and Training base (Recently BD has been introduced two new special outposts, the Metal Mine and the Oil Well).

Settlement
It use settlements to relocate your colony. For every settlement your colony’s pop cap raises 100 workers at a maximum of 1000 workers.

Teleport Gate
It allows instant travel from gate/colony to gate/colony. If one of the gates/colony is jammed you cannot teleport to or from there.

Missile Silo
It allows you to build a missile. Missiles destroy 10% of the units on the target colony/outpost

Training Base
It enables you to recruit soldiers at distances away from your colony. *note* players may have only one Training Base at a time.

The Metal Mine
This op can only be captured. When it is captured it increases metal output for your entire alliance by +5.

The Oil Well
This op can only be captured. When it is captured it increases oil output for your entire alliance by +4.

Ticks are the Battle Dawn turns. Every 30 minutes, a Tick passes in which all squads advance, resources are produced and battles take place. After each tick, you should refresh the game client in order to see the latest updated view of the world.