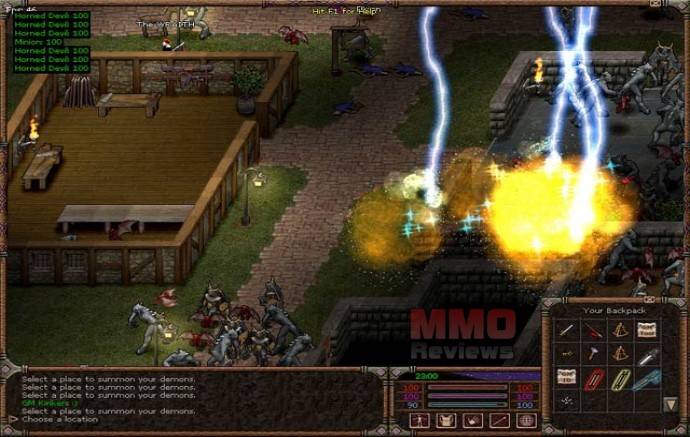 Developed by Iron Will Games for Windows.

It's a free-form game - there are no limits to what you can do or learn with your character. It is similar to classic pen and paper games where your attributes (Strength, Dexterity, Intelligence, and Constitution) determine how good you are at certain activities - there are no classes or restrictions. You can spend time hunting with friends, exploring the world, honing a skill or craft, or completing quests.

It is a safety measure that prevents a player from harming game NPCs or other players by accident. You can toggle Target Protection on and off by pressing the "T" key. If you are a mage, make sure the box on the top left corner of your Rune Case is checked (Press C to bring up the Rune Case). Keep in mind that harming other players or NPC townsfolk in the presence of guards will make you a wanted criminal. Even if guards are not around, peaceful NPCs such as townspeople, or deer, will erode your reputation.

The way you conduct yourself among your peers in the world of Ashen Empires will ultimately be reflected by your alignment, or Reputation. Every one is born into the world with a neutral alignment...some races are more neutral than others. By showing respect towards other players and townspeople, attacking monsters near your level, and completing quests from Lotorian and Chaos Knights, you will slowly but surely join the ranks of the most respected.

If you cause disruption in town or loot another player near the guards, you will be classified as a temporary criminal. If you enter the area in or around a town, guards will attempt to jail you. If the guards kill you, you will be sent to jail.

Jail is a place where guards send criminals. There is a holding area and rock yards, where you can crush rocks to reduce your sentence. You may be sentenced to hard time in Jail. You must serve that full sentence. You may buy a jail perdon from the token store that allows you to leave jail without crushing rocks or serving time.

City Sieges are a tumultuous event; they change the faction alignment of a city so that the opposing side cannot speak with NPCs in that town or enter the town without the risk of being attacked and jailed by town guards.

Each town is protected by a Town Guardian, a huge golden knight. Attacking this figure will trigger the siege. If the Town Guardian is killed in battle, the victors claim the town for their own and all members of the faction automatically gain the town bonus.