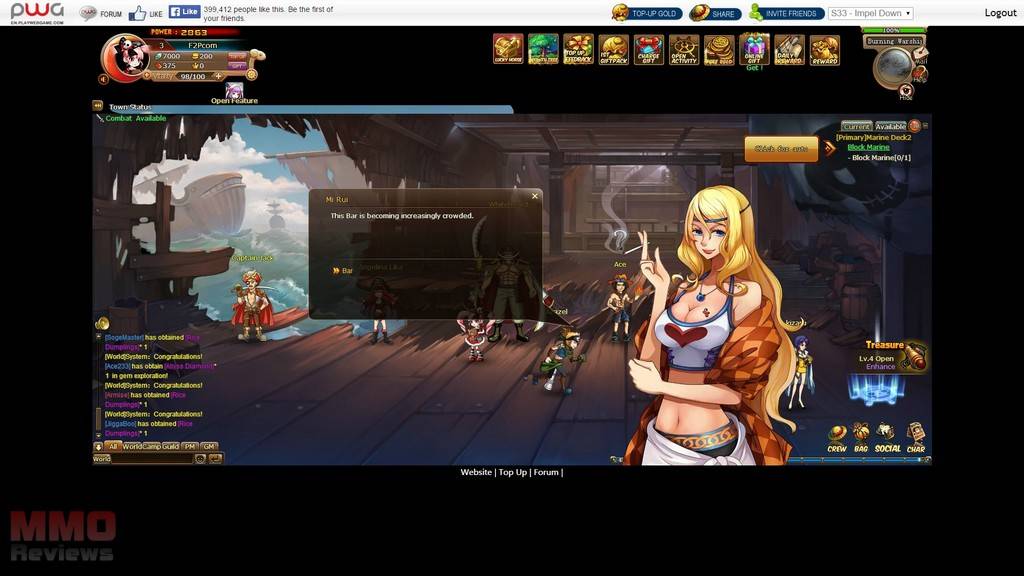 A free to play web-based MMO with optional client download, Anime Pirates is an exciting adventure across the seas as players step into the role of the captain of their own fierce and adventurous pirate crew in search of a legendary treasure ship. With strong elements of PVE and PVP, players will engage in turn-based strategic battles against challenging computer opponents as well as facing real-world players from across the globe. The game offers various levels of VIP membership to gain access to more benefits, bonuses and member only perks.

Just as he was about to be executed, Gol D. Roger, the legendary Pirate King, mentioned his amassed treasure hoard that he had gathered over his lifetime and mentioned that it was out there for anyone looking out to find it, no doubt to try and save his own neck but more likely to try and sow chaos and a wave of piracy across the land. It worked and any able-bodied man or woman has taken up a life of piracy and sailing the seas either captaining their own ship or joining another as crew.

The foundations of the game revolve around the battle formations and acquisition of crew, NPCs that will join a player and fight alongside them in strategic turn-based automated combat. Players must analyse the various abilities of their acquired NPCs, work towards levelling them up and kitting them out with equipment and other perks and optimising their battle group in hopes of working their way up the player rankings and ultimately becoming the Pirate King.

Players can choose from a variety of characters, six in total, each with their own background and reason for joining the great adventure. The character a player chooses is the foundation of their battle group/ crew, with their own abilities and powers players will have to mitigate their weaknesses by hiring on other powerful NPCs and recruiting them into the crew roster. Crew are divided into two groups; Role Crew and Fame Crew, the first being accessible with normal currency whereas the Fame Crew and PCs require the acquisition and spending of Fame, which is earned through engaging in other challenging activities within the game such as PVP, Harbour Battles and defeating World Bosses.

Each NPC that can potentially join your crew has their own unique attributes, talents and most importantly abilities, powerful skills that can greatly aid a crew in battle such as delivering a huge amount of damage against enemy opponents. Such abilities are only accessible if a Crew member is in the optimal position in the active Battle Formation.

In the game there are various battle formations available which determine the pattern/layout that crew are positioned in when they enter battle, e.g. a heavy front line focusing on defence or a heavy backline focusing on ranged attack and DPS. With 5 positions available in each formation, players must choose their optimal five Crew to fill the positions to try and get the most from them both individually and as a team.