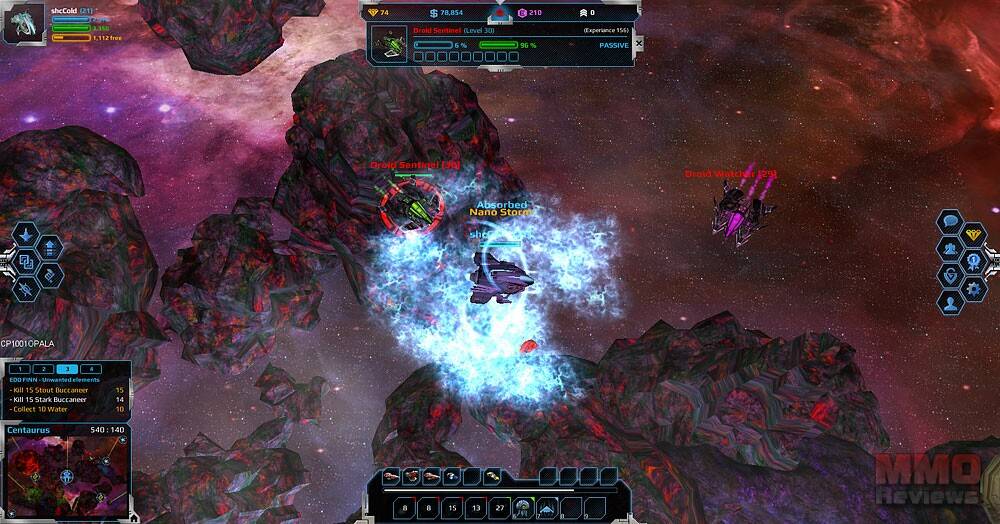 Andromeda 5 is a new free-to-play browser-based action space MMO that is still in development. It features several game modes for solo and team play as well as a huge universe to explore where players will fight against each other and complete missions. Taking over the pilot’s seat of your own space ship, you will train and improve your skills and talents and upgrade your ship to turn it into a real killer machine.

- 20 magnificent galaxies to explore
- 15 different ships to choose, upgrade and customise
- Over 200 different missions to complete for great rewards
- Over 30 skills and talents to train your pilot in
- Different modes ranging from free-for-all battles to team-based games
- Directly playable in any browser on PC, MAC and iPad

At launch, Andromeda 5 will feature 20 beautiful galaxies for players to discover and where they could fight anyone from harmless freelancers, traders and space droids to the deadliest pirates, assassins and battlecruisers. The following ones have been presented so far:

Andromeda - Andromeda is a galaxy without a ruler, where only a few have entered and left it alive... Even mercenaries do not enter it if not in a very large group with a serious mission.

Mensa - Peaceful and quiet, Mensa has always been a good place to rest from great battles. It has never seen a big conflict and remains a nice and quiet place to hide. If you are lucky, you may encounter old veterans here and hear their stories about the great battles of their time.

Orion - The peaceful looks of beautiful Orion are misleading; it has been the source of trouble for many space empires. It is filled with outlaws and danger awaits everywhere.

Taurus - Taurus is the first galaxy, where you can find pilots of the opposing faction and there are lots of freelancers as well. It’s not safe for anyone but a place to go in order to get in a good fight.

Ursa Major - Ursa Major is home of the mercenaries across the universe. Many conquerors and invaders have stayed here to fill in the missing pieces of their armies.

Canis Minor - Filled with retired military pilots who are always grumpy and unpleasant, Canis Minor is a bad place for space tourists. For the time being Canis Minor has never seen a big fight, but nevertheless it is still one of the galaxies where you can get in trouble quite easily.

The game once launched, players will be able to choose between 15 different ships they can configure to make it a real space killer, upgrade and choose the skin for they like the most. Currently the following ships are available:

Serpent - A bit slow but with long range weapons and very high shield value, the Serpent is suitable for short battles as it provides the opportunity for high damage output with minimum effort.

Boar - Boar is a third generation battleship designed to sustain in the long battles and wear the enemies out. Fast enough for chasing and with great amount of corpus, it is very appropriate for everyone who likes to shoot more than use special abilities.

Destroyer - With its distinctive looks and amazing speed, the Destroyer is one of the most feared ships of all times. The 2 plasma slots guarantee long range and the ion makes those who come closer run away scared.

Mantis - Despite looking like a small and harmless ship, the Mantis shouldn’t be underestimated. There are 2 hidden ion cannons that could blow away any enemy. It may be slow, but it is deadly.

Tiger - Due to its great amount of hull and even greater shield, all weapon slots, amazing cargo capacity, nice targeting and avoidance values, the Tiger is, without any doubt, the perfect ship for everything. It is a bit heavy but takes pilots wherever they want to go.

Cormorant - Swift and deadly is the perfect description for the Cormorant with its 2 plasma slots suitable for attack from long distance. While not possessing much cargo space, the high ship speed is good enough for engaging and running away.

Players will come across a huge variety of enemies throughout the galaxies. Amongst others, there are several alien species:

Annihilator - When seeing an annihilator, it’s time to turn around and run as they’re fast and deadly and named like that for a reason.

Buccaneer - Buccaneers are peaceful aliens that won’t bother others at all as long as they’re left alone. Looking a bit inert, a Buccaneer will give you a very hard time taking it down though.

Disruptor - Disruptors are a bit slow and do not like anyone around them. Despite their speed, they have great range and shoot quite quickly.

Droid - Droids are the most common aliens you will encounter in space. In general, they’re not aggressive, but messing around with them is probably not a very good idea.

Parasite - Parasites come in every kind and size and rule over Taurus and Scorpio galaxies. Unless being prepared for a real fight, one should avoid them. If they look like they will kill you, they most probably will.

Trident - Similar to the Disruptor, Tridents are aggressive, with fast, long-ranged weapons and a bit slow. They quite rare but have always been and will always be a threat in the galaxies.

PvP battles in Andromeda 5 will take place in several arenas on distinctive mini-maps as well as open PvP galaxies. A matchmaking system for arena fights guarantees that players are quite evenly matched with others close to their own level and honour rating.