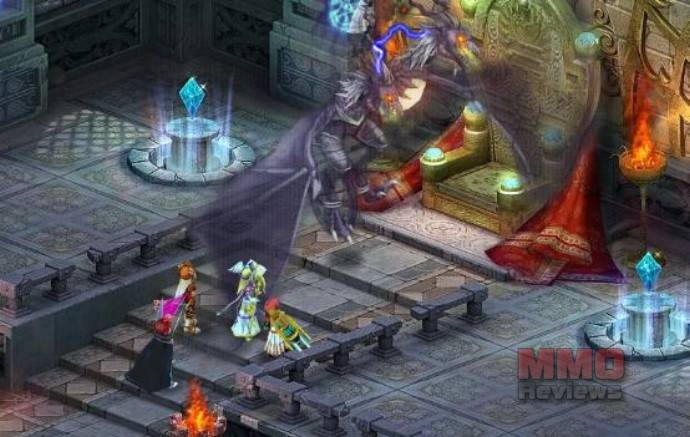 Developed by IGG for windowws.

Altis Gates is a turned-based, free to play, 2.5D fantasy MMORPG.It is set in an ancient world of European stories and legends. The stories are set in the land of Altis, a world that takes design cues from European classical architecture, with a modern twist.

When you first enter the game world you will receive a pet egg. This egg will hatch to become your very first pet. Starting pets can be a Mushroom, Slashworm or Jack Rabbit. As your first pet, its amity toward you is set at 2 Big Hearts from the moment it hatches. This means that it can learn spells and abilities right from the start. However, starter pets cannot be traded. Along your journey through Altis Gates, you can acquire many different and often more powerful pets, but the first is always the most memorable one.

In the world of Altis Gates, there exists a balance among the 4 naturally occurring elements of Fire, Wind, Earth, and Water. Fire counters Wind, Wind counters Earth, Earth counters Water and Water in turn counters Fire in the cycle of relationships between elements. For example, using a water element attack on a fire-type monster will cause more damage than normal. In the opposite case, using a fire element attack on a water-type monster will cause less damage than normal.

Groups of players can use formations to improve their effectiveness in combat. There are 4 types of formations: Earth, Water, Wind and Fire. In each formation, players will enjoy an enhancement or suffer a reduction effect depending what position they occupy within the formation. These effects are only applicable to players.

In Altis Gates there are 2 main Class families, and 3 possible generic Advancements each for a total of 14 Classes (2 Classes, 12 Subclasses) in all.

Warrior
If you're th kind of player who likes to be in the mix, smashing and bashing your enemies, then this is where you'll start. Every Warrior is able to use swords, axes and cannons as weapons. Due to their strength in attack and defense, Warriors serve as the main offensive component of any formation. Warriors can evolve to become a Gladiator or Combatant, and advance further to become a Berserker, Swordsman, Gunner, or Mechanic.

Mage
If you prefer the mysticism and power of spellcasting, then this is where you'll begin your journey. Although Mages don't have anything close to the physical attack or defensive power of Warriors, their magic powers are indispensible in battle. Due to weak their defenses, aspiring Mages would be wise to journey with a melee-based companion. Mages can evolve to become a Black Mage or White Mage, and advance further to become a Wizard, Shaman, Priest, or Cleric.

Gladiator
A sub-class of Warrior that are focused on attack and defense. While venturing into forbidden lands, whether traveling alone or in a group, Gladiators stand out with deadly physical attack power and stalwart defense. They do suffer a bit when confronted by enemies that specialize in magic attacks, but they can train to be a Berserker or Swordsman, limiting their weakness in facing those classes.

Combatant
A sub-class of Warrior that focuses on tactics. Combatants specialize in long-range weapons, which have lower attack power than swords and axes, but when combined with magic skills, their attacks provide an edge over close-range fighters. A Combatant can be trained to become a Gunner or Mechanic.

Black Mage
A sub-class of Mage that specializes in dark, evil magic. Black Mages can train to become a Wizard or Shaman.

White Mage
A sub-class of Mage that gives up the deadly personal power inherent to dark magic in exchange for the much less heralded power of healing, and the strengthening of teammates in battle. Though often underrated for their reliance on teammates, they can often surprise strong enemies with the tactical advantages they bring to the whole team. White Mages can train to become a Priest or Necromancer.

Swordsman
A sub-class of Gladiators that have mastered the arcane art of the magic blade and magic shield. This combination is ideal for melee-based players who appreciate the power that magic can lend their ferocious attacks.

Berserker
A sub-class of Gladiator that specializes in pure attacking ability. Berserkers are all-out attackers.

Gunner
A sub-class of Combatant that favors teamwork. A Gunner can cause suffering in enemies by afflicting them with various conditions or with their deadly accurate shots. They also have high stamina, making them a very hard target to bring down.

Mechanic
A sub-class of Combatant that specializes in repeating attacks and summoning puppets. A Mechanic's performance improves drastically as they advance to higher levels.

Shaman
A sub-class of Black Mage that has mastered magic attacks based on the natural elements. The magic attacks of a Shaman are not only powerful, but also can deal substantial damage to multiple targets within the area of attack.

Wizard
These magic-user's focus on weakening the power of their opponents. Wizards excel at weakening powerful enemies and leaving them vulnerable to powerful melee-based teammates.

Priest
A sub-class of White Mage that specializes in healing. No matter how grievous the wound is, a Priest can help you fully recover.

The Shop system allows players Level 45 and above to create a shop through a certain NPC and then do business conveniently. After creating a shop, you can put your items up for sale. When you have a shop, you will no longer need to set up a stall and stay in one spot to sell your items. When you've hit Level 45, you are eligible to create a shop through the NPC named Skylok located in Altis City (250,170). The owner of a shop can appoint somebody as the vice owner of the shop to help manage it, but each shop can only have 1 vice owner and only Level 45+ players are eligible for the vice owner post.