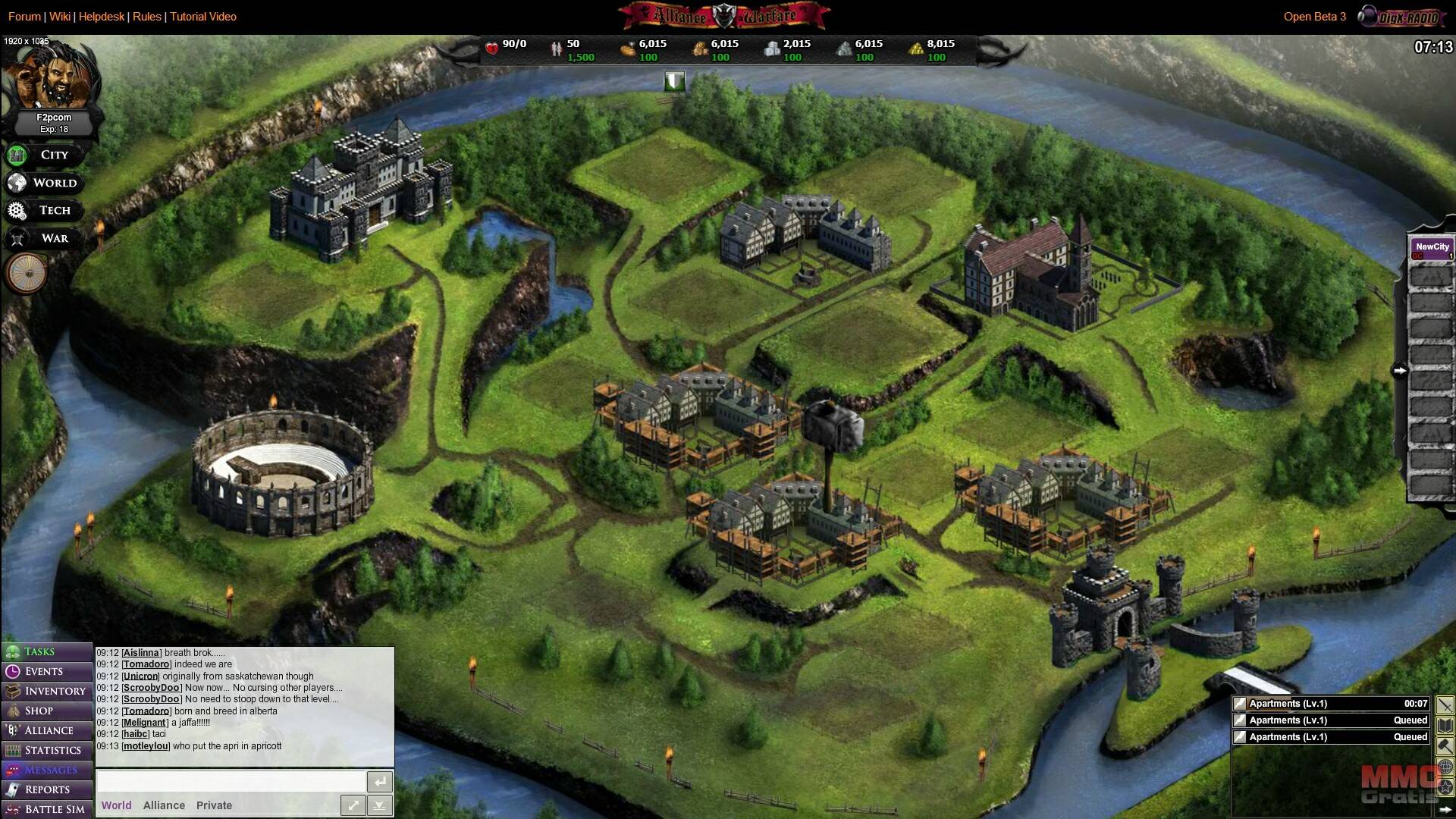 Alliance Warfare is a free-to-play browser-based MMORTS in which you will have to manage an empire and train huge armies to conquer the world. To achieve this also you will have to recruit allies and research advanced technologies. And while playing you can enjoy the incorporated live radio station.

At the beginning, there was peace between the tribes, who merged into one prosperous and solid nation. The timeless Ancients ruled with soft hands and gentle hearts. However, peace was fleeting, and two of the Ancients got tired of the petty quarrels of the mortals and finally angry with the imperfection of the people of Historia, Kalebria, Rivaria and Cemoria. They decided to teach them a lesson by separating the four Nations and leaving them on four different continents. From that moment the mortals lived as they chose, but without the light of the old gods.

People began to have to fight for their lives, they had to fortify their cities, prepare for war and looking for others to form alliances. This is their only hope of survival. Peace is only a distant memory. They must fight to recover their lands and the right to rule them.

BUILDS CITIES
In the game you have to build and manage your own cities, and to do this you can build a large number of available buildings: apartment, cityhall, market, rally watch tower, consulate, storehouse, walls, tavern, barrack, factory, archer range, spy camp, stable arena, hospital, etc. And to protect your cities you can improve the walls with watchtowers, traps and defensive catapults.

You can train your troops in 5 in five different facilities, to get various types of units such as: peasants, militia, spies, pikemen, arsonists, swordsmen, axemen, archers, crossbowmen, cavalry, heavy cavalry, transporters, ballistas, catapults, bombards, and ships.

To lead your armies you have to hire generals, and you can make them stronger training them in the arena. Wounded troops can be healed in the hospital.

In Alliance Warfare players have to build sawmills, quarries, gold mines, iron mines and farms to collect resources every hour. To do so, they have to be placed in a specific area that grants the corresponding resource. There a different types of valleys to be captured in order to gain their resources: forest, lake, grassland, mountain, hills, and open range. Attacking NPCs also yields resources.

Players can join or create alliances with other players to conquer lands defeat enemies and rival alliances. Buildings ships allows them to sail to any of the four continents to conquer territory over there. It’s possible to build and expand up to ten cities on conquered lands.

To investigate new technologies first you have to build campus buildings, such as schools, universities, churches, alchemical laboratories, shipyards, workshops and banks.

You can choose to investigate three comprehensive tech trees: one focused on resources, another in knowledge and the latter focused on military issues.

The game has its own radio station that allows players to choose the music that they want to hear while playing.