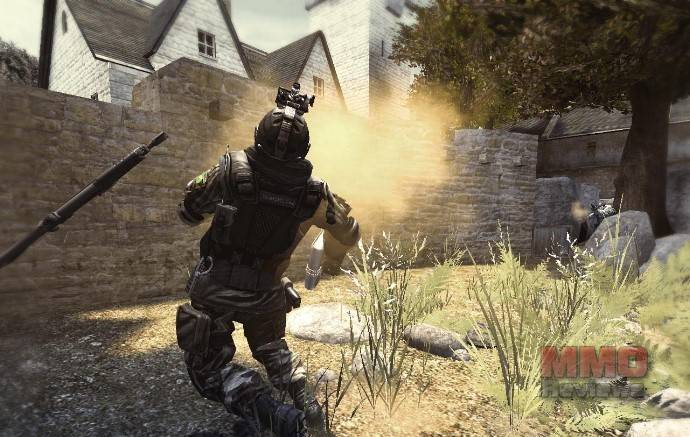 Developed by Redduck for Windows.

A.V.A is based on a fictional war between the EU (European Union) and the NRF (Neo-Russian Federation). Gameplay is very similar to many other online FPS, weapons are bought using in-game currency in the store menu. From the store menu, purchases of an assortment of weapons, attachments, armor, helmets and skill upgrades can be made. All of these have a durability meter which lowers as they are used more in-game.

A.V.A features a radio chat system, similar to other FPS. Voice commands are context sensitive. The PC's voice tone changes depending on the PC's remaining HP and the situation the PC is currently in. For example, a voice commands usually have a normal tone, but when in a firefight the PC character will start to yell them. Also, if a teammate dies while near another ally, that ally will shout, phrases such as "The Commander's been hit!", if the commander is shot and dies. Characters will also say when they are throwing a grenade or reloading. Players can choose between side-specific voices (EU will speak English in radio messages, while the NRF will speak Russian) or the localized voices.

Weapons are able to be customized by a variety of attachments that can be bought from the store menu, such as PEQ-2 systems, silencers, grips and scopes. However, not all weapons can be equipped with certain attachments. Silencers can only be used on Submachine guns, and some handguns. Assault rifles and Sub-machine guns may have laser sights and scopes if they have a Picatinny rail system. Certain weapons also need to be converted to support rails, for a small cost. Snipers can have scopes with higher levels of zoom. New attachments, and various types of equipment are expanded upon are added during monthly updates.

- Annihilation - 80-180 points: Essentially team deathmatch, the EU and NRF compete for the most kills before the time limit or score limit is reached. The winning team is based on who has the most points at the end of the round.
- Demolition - 6-8 rounds: In this mode the EU must plant a C4 bomb in one of the two designated bomb sites before time runs out. The NRF must defend these bomb sites.Again the two teams may also eliminate one another for a win, but if the EU plant the bomb the NRF must defuse it before they can win.
- Convoy - 6-8 rounds: A nuclear suitcase is guarded by the NRF on the map, the EU must find and bring it back to their spawn before time runs out. The two teams may also eliminate one another for a win.
- Escort - 2 Rounds: In escort, the EU protect a tank moving through the map as the NRF use Rocket-propelled grenade's stored in lockers across the map to stop the tank from moving. The tank must reach the end of the map before time runs out. Along the way there are checkpoints in which the EU will spawn at once the tank has reached them. One RPG hit slows the tank down, two disable it. Once the tank has been disabled, the EU can repair it, and it will continue moving. At the end of the first round, the players switch teams and sides.
- Free For all - 30-90 Kills: Newly added game type in mid-February 2008. This is a game type in which the objective is to kill anyone, until the set amount of kills has been reached. There are health-pack stations scattered across the maps which refill the health bar but, there is no way repair the armor. FFA was released with two demolition maps redone for Free for all. An SMG the PP-2000 was released with this as well. Currently in the Korean version only.
- Suppression - 5-15 rounds: Up to four human EU players must survive streams of computer controlled NRF soldiers who drop health or ammunition upon death. The human players also have a limited number of lives per round. Currently in the Korean version only.
- Domination - 1 round: EU and NRF teams must capture the command post located in the center of the map and to occupy it for a period of time to win.
Survival - The EU team made of up to four members, have only one life to kill as many computer controlled enemies as possible. Enemies drop either health or ammunition upon death and get progressively skilled as time goes on.
- Escape - The EU team must kill a set amount of prisoners. Then proceed to the underground escape door while battling their way through many prisoners. Then unlock various doors, and plant C4.
- Rescue- updated on present. This mission is one of prisonbreak misson.EU forces must rescue the 'EVA' ,she is officer of prison, in the mission area , and escort to the chopper.'EVA' Must living during the escort. if you succes this mission, can take a lot of euro.

- Rifleman; Universal soldier for all kinds of operations. Can join in under any battle status. This class is more than capable for all types combats. Can employ wide range of variable strategies.
- Pointman; Highly mobile class specialized for close range assaults. Very effective when attacking enemy troops from behind or when scouting.
- Sniper; Capable of effective attack in far distance. Suitable for defending certain area or supporting main attack force with covering fire.