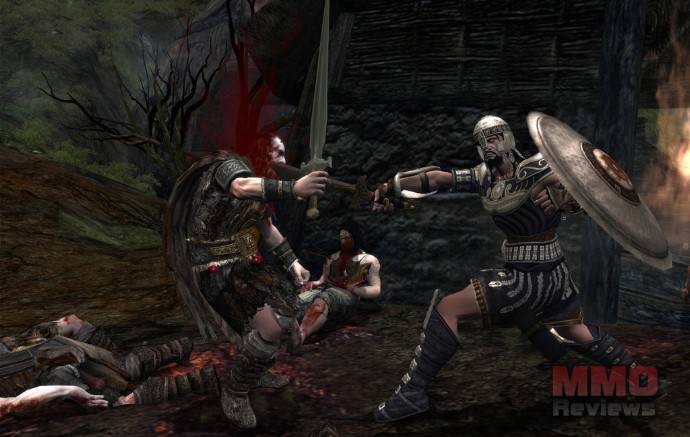 Developed by Funcom for Windows.

Age of Conan: Hyborian Adventures is a free to play MMORPG with subscription based premium features. The game is set on the world and works of acclaimed author Robert E. Howard.  In Age of Conan, players enter Hyboria with thousands of their friends and enemies to live, fight, and explore the dark and brutal world of King Conan.

- An advanced combat system lets you choose every cut, thrust, and swing in real time.

- Groundbreaking graphics plunge you into a world of breathtaking beauty.

- A massive fantasy world based on over 75 years of books, movies, art, and music, developed in close collaboration with Conan Inc. to ensure the most realistic Conan experience ever seen.

- Massive Player Versus Player combat. Capture battlekeeps and wage epic warfare between players and guilds, or hire yourself out as a mercenary and battle for pay!

- New and exotic classes, such as the Demonologist, Herald of Xotli, and Dark Templar, along with incredible twists on classics like the Ranger and Assassin.

- A detailed and engrossing crafting system, allowing you to make everything from armor and weapons to an entire city!

- Hundreds of unique quests for combat and crafting with extensive NPC interaction and voice acting, immersing you in the living world of King Conan.

- An extensive story-driven single player adventure to start the game drawing you deep into the scheming, seduction, intrigue, and betrayal of Hyboria.

- Aquilonians; The Aquilonians are a people divided behind a front of unity, and threatened behind a show of dominance. Their kingdom, the so-called Flower of the West, is the unrivalled jewel of Hyboria.

- Cimmerians; "You laugh greatly, drink deep and bellow good songs; though I never saw another Cimmerian who drank aught but water, or who ever laughed, or ever sang save to chant dismal dirges."

- Stygians; The Stygians are an ancient, decadent people, born of a culture more than fifteen hundred years older than any of their neighboring kingdoms to the north.

- Khitan; from the new continent.

- Assassins; Assassins are the most lethal killers in Hyboria. Those aspiring to the top of this profession face the most deadly regime of training, discipline, and study, but the ones that survive are executioners supreme.

- Barbarians; The barbarian is one of the most dangerous and feared sights on the battlefield. Their combat style focuses on strength, aggression, and relentless assault.

- Bear Shamans; The spirit of nature is strong in Cimmeria and has begun to manifest itself amongst the barbarians of the north.

- Conquerors; Conquerors are a sword-wielding fusion of heavy armor and battlefield command, rare individuals rising from the ranks of Aquilonian generals and barbarous Cimmerian war-leaders.

- Demonologists; The demonologist is the mightiest of sorcerers, wielding the power of hell and earth and capable of conjuring pillars of flame or titanic storms of electricity.

- Guardians; Guardians are the most heavily armored and well drilled soldiers in Hyboria. Capable of withstanding punishment like no other, they also have an array of deadly attacks that deal devastating damage.

- Herald of Xotli; Heralds of Xotli are hybrids of the mage and soldier archetypes who wield alien spells and two handed weapons, making them a formidable enemy on the battlefield.

- Necromancer; Necromancers summon and command the undead, and they are legion. Their ghoulish minions are capable of tearing men apart or casting their own death magic.

- Priest of Mitra; Priests of Mitra wield divine power that can aid, heal, and even bring the dead to life.

- Ranger; Rangers are the finest marksmen in Hyboria, capable of stalking an enemy and delivering devastating shots with pinpoint accuracy.

- Tempest of Set; These priests wield the awesome destructive might of Set, the snake god of Stygia.

The Real Combat engine is based on five directions, or ways, of attacking an opponent with a sword, each relating to a directional slash. The point here is that these directions lend themselves naturally to being strung together in combinations. These combos unlock additional damage and faster combat, if done well. At the start of the game, melee characters will only have access to three directional attacks – the additional two are unlocked later as the character progresses in levels.

The most important thing to remember in Age of Conan is that it does not have indirect combat. When you click, you will swing! It doesn't matter who is in front of you. It doesn't matter if you are too far away. It doesn't matter if you have an opponent at all. When you swing, you swing. This is not a turn-based game, although there is difference in weapon speed and spell speed, so you can't win by punching buttons faster than your opponent. Naturally you can't be locked in battle with this type of system. You have to be careful, move about, and think quickly to survive.

The mounted combat will come in two forms. First, you can fight from horseback with almost any weapon. You'll move quicker, but you won't have as many combat options. You can't strafe with a horse, for instance. Second, you can access special moves which include charges that have a fair chance of flinging your opponent around as you thunder past.

As with any NPC player follower, the mount can be beaten unconscious, and can not be revived until the end of battle.

There are currently three speeds of mounted combat - walk, trot and gallop. Walk is slower, but you can turn more quickly, trot is slightly faster, deals more damage but it can't turn as well, and gallop is the same as trot, but to a higher degree.

If you are a premium subscriber you will have full access to all the features, but as free to play player you will find game limitations: 4 available character classes, no allowed to enter dungeons, sieges will be unavailable, 50% bank space, only 2 character slots, basic only mount training, no offline levels and veteran points and no item shop discounts.