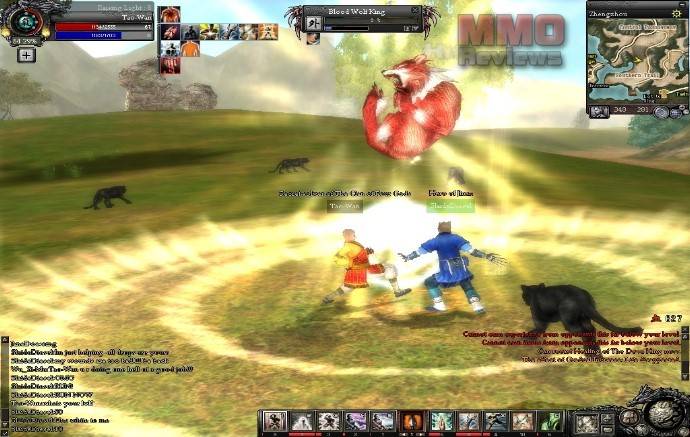 9Dragons is a Martial Arts MMORPG, free to play, set during Ming Dynasty of the ancient China. The Land where Martial Arts chivalry was born. Learn Kung Fu and understand the ancient philosophies that triggered some of the most revolutionary moments of human history.

The design team has paid meticulous attention to the period authenticity of all the available cities, weapons, moves, costumes and locations used in 9Dragons. The Land itself will be constantly evolving around you as new cities, quests. Also, special events are continuously added and updated.

- Lands of martial arts: Once you have downloaded the game and created your own unique character, you will soon find yourself wandering the dusty streets of ancient China during the Ming Dynasty. Talk with people you meet and you will begin to understand the lay of The Land, and the mighty forces that dwell within it.

- Kung Fu: nothing is more essential in this dangerous world then learning some strong Kung Fu. You are urged to find a local trainer and begin your study of Martial Arts as quickly as possible. Mastering Kung Fu is the only way for you to survive the harsh realities of The Land.

- Clans: Once you have learned some Kung Fu, it is time to join a clan, seek a master, and begin your real training. There are nine major clans in The land, each based on actual historical clans, including six that new disciples can join, which include: The League of Beggars, Shaolin, Wu-Tang Clan, Heavenly Demon, The Brotherhood of Thieves and Sacred Flower. Disciples who have achieved a certain level of mastery can later seek to join three advanced clans, which include: The Union of Noble Families, The Disciples of Iron Fist and Black Dragon Clan. Once you've joined a clan, you have set your foot upon the Road To The Dragon, and the whole world of martial arts chivalry opens up to you through a series of noble quests.

- Battle: If your thirst for combat is not quenched by fighting through the thousands of beasts, monsters and opponents that The Land has to offer, there are still more opportunities to test your skills… You can engage with your fellow disciples in Clan Wars, which are grand scale battles that pit your clan against the minions of other clans. Or, to settle more personal disputes, you can make full use of our Dueling Facilities and go head to head with other players. We also offer two options for general play: Pleasant Servers where combat between players must be proposed and accepted, and Player Kill Servers, where the dangers of The Land are greatly increased in an anything goes atmosphere.

Storm vs Storm refers to a power struggle between the Hero Bands for their possession of neutral territories, called Fortresses. These struggles occur because the Hero Band occupying certain Fortresses can charge trade taxes on all items traded in that area.