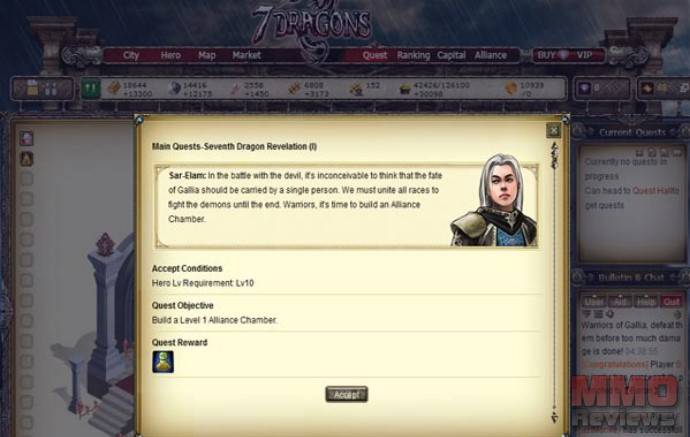 7 Dragons is a free to play strategy RPG for internet browsers where players must to Build up their empires to dominate the land of Gallia, by leading their heroes to victory over monsters, demons, and other players.

Long ago, before time began, two dragons ruled an infinite void of scattered atoms: A Dragon of Order and a Dragon of Chaos. Chaos loved the infinite void and reveled in its vast expanse, but Order saw the potential of arranging the atoms, creating Gallia, and the four elements, Earth, Air, Fire, and Water. These elements took the shape of their creator, becoming mighty dragons themselves.

But Chaos was jealous of Order's creation, and tempted Earth and Fire until they turned against their master. Thus began the war of the 6 Dragons, who each summoned their own beings from the ether. From Order, Air, and Water came Humans, Forest Elves, and Scholars. From Chaos, Earth, and Fire came the Undead, Dwarves, and Dark Elves. Their war raged for centuries until a wise sorcerer named Sar-Elam forged an uneasy peace between the two sides. In thanks, both Order and Chaos great power upon him, granting him the title of the 7th Dragon.

Yet, for all his powers, Sar-Elam is aging. As his powers fade with the waning Age of the 7 Dragons, so has the truce between the sides, and a new leader must take his place. While there are many that have come before you, you may be the one to rise above them to take the title of the new 7th Dragon and shape the destiny of Gallia.

Humans
The valor of knights enchants all who harbor a hero's dream. Humankind's solid platemail and sharp blades endow them with excellent physical defense and above-average physical attack. In times of peace they are gentle guardians. When their home is threatened, their furious roars will shatter the nerves of their foes. Therefore, to groom a loyal and heroic knight, you must pay a dear price.

Forest Elves
Possessing powerful survival characteristics, and all their armies have excellent mobility, moderate defense and offense capabilities. Their deft movement speed displays their affinity as hunters. They live among the trees, inheriting their traits, therefore do not require many resources. Their flowing blood has long been replaced by fluidity of the racial guile.

Scholars
The aloof and prideful wizards have always held firm belief in their own powers. Even though they are clad in gaudy mage robes instead of sturdy plate, the concentrated focus of their magical prowess is enough to send an entire legion to the gates of Hell. Before the elegant wizards acquire such unfathomable ability though, they pay a great price for it; in the form of time and gold.

Undead
For one who inherits the mantle of wizardry, their pact with the underworld was a decision of blasphemy. Trailing the shadows of the heathens are countless spirits and awakened skeletons. When you dare walk close to an Undead wizard, you would probably not have the will nor strength to even grip your weapon. All that are buried within the good world are playthings of the Undead, so they don't require any capital; they can amass a massive undead army in the shortest time imaginable.

Dark Elves
They are without brute offense nor superior defenses. But the darkness has endowed the Dark Elves with the swiftest of moves. Their short and compact daggers allow even their shaodows to launch unimaginably explosive attacks in the shortest time possible. If you saw one of them, you'd probably already be dead. From every scant handful of Dark Elves, a ruthless assassin rises. Their hardships may not compare to the knights' or wizards' trials, but the price paid is nonetheless harsh.

Dwarves
The stale and dry atmosphere of the subterranean attribute to their easily irritable and unsociable behavior. The role of guardians have bestowed the Dwarves with hardy defenses. They are not rowdy hunters, but silent protectors. They pay for their excellent defense with lacking offenses. The classic definition of a defender, with the tenacity to withstand any attack; a trait that is perhaps honed through years of training and practice. As the guardians of the gods, their natural constitution has spared them much of the effort in training. All these however, do not put them at an advantage over the Dark Elves.

In the game, players can currently perform different modes of combat: Combat against wildlands monsters (Hunting Point), against players in city invasions and arena combat.

Players can attack, conquer and scout other player cities. They can obtain respective resources and gold after winning an attack on another player's city. Dead soldiers of both parties cannot be revived.

Each player can have a main city and many sub-cities at the same time, but when a player enters the game for the first time, the system will recognize the player's first city as the main city by default. When a player own many cities, he can designate any of his cities as his main city.