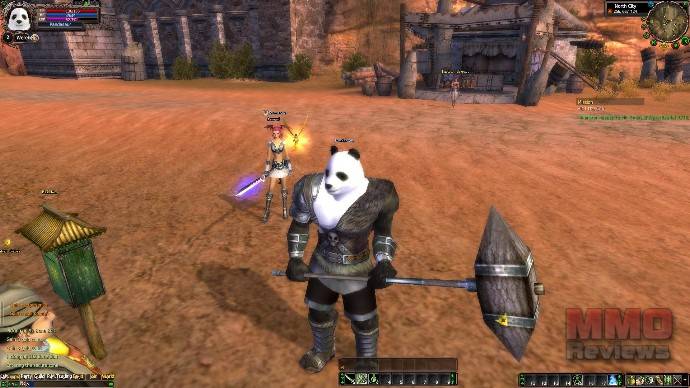 It features three races, each with two exclusive classes, bringing the total of six classes that players can choose from. Each race has unique characteristics, begin in different areas of Pangu, and undertake different quests. Genesis expansion adds a new race and two new classes.

- Humans are the primary race in the northern realms of Pangu, with the main settlement being the city of Etherblade. Humans have no innate abilities, but fly with the aid of magical weapons. They canbe Blademasters or Wizards.

- Untamed are human/beast hybrids living in the west of Pangu. Untamed characters can transform into animals, and can use flying beasts at Level 30. They can Barbarians and Venomancers.

- Earthguard can choose between seeker and mystic.

When trying to take the area from another guild you will have to partake in battles up to 80 vs. 80. In Territory battles  there are two bases and two guilds. When you want to take over an area, your guild will have to bid on the area, the guild with the highest bid will fight the current owners for ownership.

When attempting to take a previously unowned land, your guild must bid on the territory. In the case of multiple bids, the guild with the highest bid will win. The guild that wins bidding will then have to clear the entire territory war map of monsters, including a boss located in the opposite base, within 3 hours.

The mount system in Perfect World allows players to ride a pet mount as a means of quickly traveling across the world. Available mounts common to all servers are regular horses, panthers, leopards, raptors, and elephants.

As a prevention system against account hackers, Perfect World has a Phone Lock featurefor those who wish to use it. The Phone Lock, when activated, will freeze an account until the player of that account dials in using the registered phone number. Once the number is recognized, the account is temporarily activated for login. The player must login within 10 minutes of activation before the account login is frozen again.