New class & giveaway for Continent of the Ninth Seal (C9)

Webzen's adrenaline-pumping 3D Action RPG Continent of the Ninth Seal (C9) will receive a brand new class. Starting tomorrow, July 24, 2013 (Global Server Time), C9 players will be able to play as Demonisher, the newest advanced class for the Shaman. In order to celebrate this addition as well as the game's first anniversary, the publisher will host several special events and a giveaway.

The Demonisher, the fifth advancement within the Shaman class, uses a mystical orb as her primary weapon to launch powerful offensive strikes, while evading attacks from her enemies. Besides her long-range magical attacks and incredible surges of strength, she can also transform into another being and inflict explosive damage on her opponents. This transformation increases the character’s speeds while strengthening some of her skills. Demonishers also assist their allies in battle by enfeebling their enemies.

In addition, there will be a huge celebration in-game tomorrow. During an in-game drop event, a massive online competition between servers, players will battle monsters that drop free items and collect special tickets for additional rewards, including gamer hardware. Moreover, new players joining the game will receive two special support chests for playing and be given the opportunity to immeadiately start with their newly-created character at level 20.

And to top this all off, Webzen has partnered with MMOReviews.com to offer you an exclusive free item giveaway. The promotional event run from July 24 to August 17, 2013 (Global Server Time). 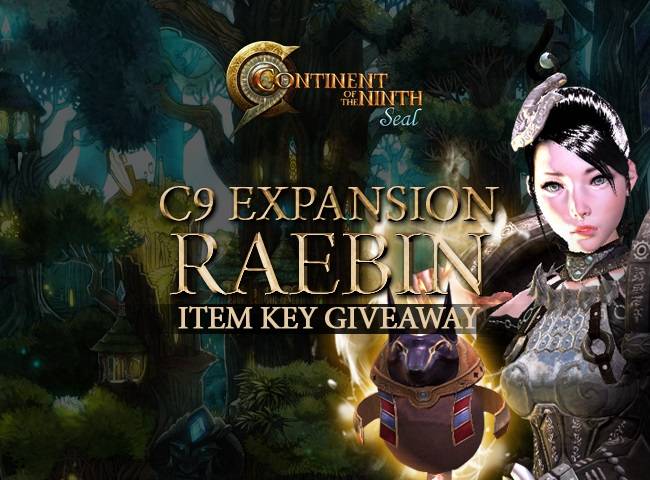 To receive and reedem your code, follow theses steps:

Step 4. Choose the server and create a new character. (Skip this step if you're already a C9 player.)

Step 5. Visit Continent of the Ninth Seal – C9 and enter the key you've received. Click "redeem" and begin your adventure!

Continent of the Ninth Seal (C9) will take you to the fantasy world of Glenheim, in which players fight against evil forces and gigantic monsters. Utilizing extremely powerful melee, ranged and magical skills, you will fight swarms of evil, demonic forces using FPS style controls in a huge, dungeon-based 3D world.

This entry was posted on Tuesday, July 23rd, 2013 at 11:46 am and is filed under MMO News. You can follow any responses to this entry through the RSS 2.0 feed. Puedes dejar una respuesta, o un trackback desde tu sitio web.