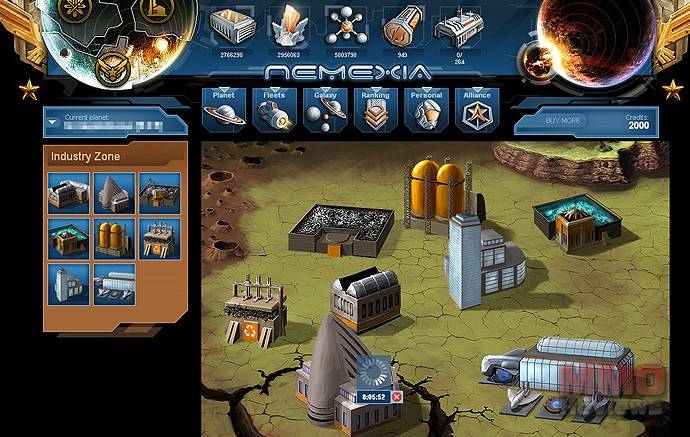 Nemexia is a free space mmo, browser-based strategy game. Nemexia gives you the opportunity to play with more than 15,000 people in one Universe. You can fight with other players, make or join strong alliances and achieve the main Goal in the game. You have the possibility to play in many different ways according to your style.

There are three races in Nemexia - Confederation, Terteths and Noxis. Each of them owns different buildings, ships and defence. In Nemexia each race has its own color skin - blue, green and red-brown.

Confederation
It's the human race. After the Terteth rebellion, the only way of survival became the path of war, so a heavy armament became a must. This race has strong and heavy ships with great power.

Terteths
Terteths are the smartest robots. Many years ago they were slaves of the Confederates but they successfully got free again because of their intelligence. They are a well balanced race.

Noxis
The aliens. Because of the environment they live in and their weaker economy, the raid became their way of life. Their ships are weak, nevertheless they are very fast.

Battles are the goal of this game. After a battle, you receive a report what happened, and, because of the randomization of ship order in combat, you can never be 100% sure what is going to happen. The report head shows date, time, coordinates of the attacker, coordinates of the defender, Attack and defence bonuses of both players.

Rounds
Launching your fleet on an attack mission, you can see how many rounds the battle has lasted. In each round you can follow what ships are left after the previous one and how much attack power is left to both sides.

End of battle
Here is the most important information:

The suns in Nemexia are a major source of energy. Energy is a "resource", which is extremely important, energy is needed for the construction and operation of all buildings in the game. The sun is born in the begining of the game with life days that are between 225 and 355. Each day of the game takes 1 day from the sun's life. If the round is accelerated, then every day takes as many days living as acceleration (for example, if the round is x2, each day takes 2 days from the sun's life).

There are three kinds of points in Nemexia - Points, Resource points and Battle points.

When you have a Premium account activated you will receive several facilitations.

•A new "Complex search" menu, where you can easily find your victims by specifying coordinates and experience constraints.
•News are kept 72 hours instead of 24.
•You can scroll in the news menu istead of just being able to see only the first for a given section.
•You can see when a user has been online for the last time.
•When an attack has been sent to you, you will see visual notification on every page.
•You can use the advanced filter at the Market.
•A "Scrap locations" menu - here you will see all available scrap around your planet.
•A "Player overview" menu - here you will be able to see generalized information about all of your planets - current resources, buildings in progress, ships, sciences, current fleets/defences.
•Building queue is extended to 5.
•Detailed battle reports and rounds analysis.
•You can save arbitrary 15 battle reports for the present game round.
•The number of Space Adventures is extended to 3.
•The number of simultaneous Specialties is extended to 3.
•You can see if an asteroid has scrap on it
•You can see all of a player's planets