Interviewing the Executive Producer for Blitzkrieg 3

This week, Sergey Orlovskiy, CEO of Nival and Executive Producer for Blitzkrieg 3, granted us an interview on the company’s newest up-and-coming WWII-themed strategy title. Just for the unlikely case that you haven’t heard about the game yet, this new real-time strategy MMO is definitely worth your attention as it pretty realistically portraits the 2nd World War focusing on historic battles that occurred.

First of all, thanks a lot for granting us the opportunity to talk with you about Blitzkrieg 3. Could you, please, introduce yourself to our readers?

Hi, my name is Sergey Orlovskiy, I am Executive Producer for Blitzkrieg 3.

Which terms would you use to present Blitzkrieg 3 to somebody who hasn’t heard of the game yet?

Blitzkrieg 3 is a World War II real-time strategy game, the sequel to the famous Blitzkrieg series that has gathered over 2 million fans across the globe. Our goal is to re-invent the online RTS for modern gamers and to blend classic RTS elements with innovative ideas.

You’ve just mentioned Blitzkrieg 3 is designed to re-invent RTS for modern gamers. Which characteristics make it stand out from its genre?

The most outstanding part is our multiplayer. RTS games were very popular 10 years ago, but then they started to fade out because of a lack of innovation. The evolution moved towards the MOBA such as League of Legends, or story-driven games like Starcraft 2. During this time, multiplayer remained stagnant and didn’t evolve enough. It was pretty much Warcraft 2 and derivatives thereof. We decided to focus on the multiplayer and upgrade it to the new standards of online games, with extensive persistent development of both military units and players’ bases, together with fast-paced and visually stunning asynchronous combat that is very appealing to modern audiences. 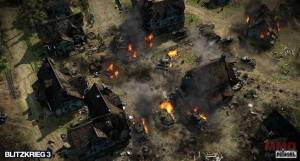 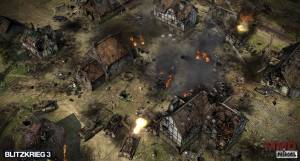 In your opinion, why should players prefer playing Blitzkrieg 3 rather than any other real-time strategy game?

Asynchronous multiplayer is actually very fun and an altogether different experience from traditional online multiplayer. Another reason would be a deep tactical element featured in all Blitzkrieg games. You have dozens of units and you have to manage them properly, considering all their stats and special abilities, surroundings and landscape features. Finally, you might want to try out Blitzkrieg for its true WWII atmosphere and exciting historical campaigns, which we keep in the best traditions of the series.

In which way will Blitzkrieg 3 differ from its predecessors? Will players still be presented with the same 3 factions (Allied Forces, Russia and Germany) to pick from?

Yes. For the single player experience there will be the same three factions in Blitzkrieg 3 as in the previous games of the series: the Allies, the Axis, and the USSR. We’ve made the step from Blitzkrieg 2 back to Blitzkrieg 1 in terms of numbers of units, so each of them have substantial persistent development and you need to develop them with care.

Is it possible to give a teaser with a few details on missions and campaign?

Single player campaigns will present each side of the WWII conflict with their own "Blitzkrieg" - a quick and victorious march through the enemy territory. For the Axis campaign, we restored their march to Paris in 1940, the Allies campaign will take a player through Italy of 1943, and the Soviet campaign will end up in Berlin in 1945. Of course, Blitzkrieg was the main tactic of the war operation as a whole, yet each campaign will consist of 7-8 missions with a variety of gameplay tactics and objectives for each. For instance, some missions will require a tank rush, while in others you will have to be stealthy yet deadly. On top of that, we are planning to add more and more different campaigns after the launch.

Regarding the amount of units, how many different types will players have access to in Blitzkrieg 3?

There will be a big variety of units in the true traditions of the RTS genre: heavy tanks, light and medium tanks, tank destroyers, armoured vehicles, artillery, howitzers, airplanes, different types of infantry, plus defence fortifications which are not used in attacking actions, but allow you to build up the defence of your base. All in all there are many dozens of various unit types for each faction. 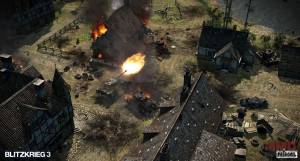 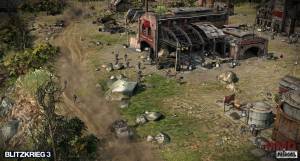 Will players be able to customise their army?

In single player historical missions, you will be playing with the set of historically accurate units for each mission. In the multiplayer mode though you will actually build, develop, and customise your forces: building different offensive and defensive units, throwing your troops into the action to receive experience points and improving them by levelling up, hiring different generals who will add certain features or tactics to your army.

What information are you able to share in regards to the asynchronous multiplayer game mode? Will this mode indeed enable players to build their own base?

Basically the Blitzkrieg 3 multiplayer mode consists of two parts – unhurried building of your defences and attacking your opponents in fast-paced battles. You’ll be choosing the different landscapes for your bases, according to your preferred defensive style, constructing production buildings and fortifications, mines, anti-tank hedgehogs, barbed wire, and reinforcing it with your defensive military units.

While attacking you’ll try to break through other player’s AI-controlled defences to capture their base and resources, applying various units and tactics to solve the brain-teaser they have left for you.

So in general, it’s a blend of single player and multiplayer modes – you are actually playing a mission, created under certain rules for you by another player.

Will the game feature any in-game clan system, perhaps including competitions and leaderboards?

There will definitely be leaderboards in Blitzkrieg 3, and later on we will introduce the clan system as well.

Please elaborate a bit on the social aspects Blitzkrieg 3 will offer.

Right now we are mainly concentrated on the core design and are not ready to talk about the social aspects in detail yet.

Have you already made a decision concerning the business model for Blitzkrieg 3? Will it be free to play?

Blitzkrieg 3 will have paid single-player campaigns with free multiplayer, where you can purchase individual missions or an optional subscription via a premium account for all single player campaigns. There will be no micro-transactions.

Will the game incorporate a cash-shop? If so, what sort of items will players be able to buy?

There will be no micro-transactions in the game. We will be selling additional historical campaigns as optional DLC though as explained in the previous answer.

Thanks a lot for your detailed replying. Would you like to mention anything else?

I would like to invite everybody to visit our website where you can sign up for the closed beta test and get a chance to be among the first players who will see the game from the inside. Thank you for your interest in Blitzkrieg 3, hope to see you on its battlefields!

This entry was posted on Thursday, October 23rd, 2014 at 11:32 am and is filed under Articles, MMO News. You can follow any responses to this entry through the RSS 2.0 feed. Puedes dejar una respuesta, o un trackback desde tu sitio web.