We have interviewed Eric Flannum the Lead Game Designer at ArenaNet, about Guild wars 2. He speaks about WvW, PvP, PvE and Game mechanics, so don't miss it!

Eric Flannum is the Lead Game Designer at ArenaNet, the developer of Guild Wars multiplayer online games and the upcoming Guild Wars 2. Flannum leads the development team that is responsible for designing Guild Wars 2, driving the direction and production of the various systems within the game. He has worked as a designer on Guild Wars Prophecies, Sorrow’s Furnace, Guild Wars Factions, Guild Wars Nightfall, and Guild Wars: Eye of the North. A game industry veteran with more than 15 years of experience, Flannum worked as an artist and game designer for Blizzard Entertainment, Shiny Entertainment, and inXile Entertainment prior to joining ArenaNet. 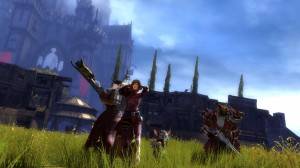 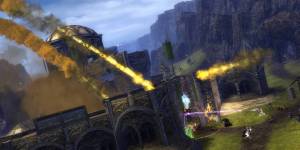 We know that you have events on the WvW zone, bosses and you can even get materials and crafting recipes by killing mobs and foes, and of course there are sieges, takeovers and other PvP stuff, but:

What are your plans for the WvW content of the game in the long run?

One of the coolest things that we’ve added to WvW recently is a persistent mini-dungeon that can be accessed through the three keeps in the center map. This area is designed with multiplayer PvP in mind and players can do things like activate the traps in the mini-dungeon to defeat enemy players. Of course, at the end of the area there’s a chest full of rewards.

We also have some exciting plans for WvW post-launch, but of course we don’t want to talk about our post-launch plans until after we ship the game and have had some time to implement things.

Will there be PvP tournaments or some other kind of scheduled competitions?

We are still talking about whether or not we want to support any type of WvW tournaments after we launch. If player interest is high, then I think it’s definitely something we’d consider.

Will there be cycles for each of it as in every month you get new neighbors, and does the map reset in this case?

In WvW we plan to match up servers every two weeks. Which servers fight each other is dependent upon their ranking. It is definitely possible under this system for two or more servers to remain matched up when the rankings are recalculated. WvW maps do reset between each two week period.

Regarding PvP, we have found the current maps of the instanced PvP are well balanced and have interesting features such as PvE bosses and war machines thus there are several ways to play it and earn points for your team, but:

How many new PvP maps you plan to create prior to release?

We plan to ship with 4 maps for competitive PvP. We’ve shown two maps at this time and are very close to completing work on the remaining two.

What new ways of earning points they will bring?

As the final two maps are still under development we can’t comment on how their mechanics work yet.

Is there a completely new type of game apart from the classic deathmatch, capture the flag, domination and so on?

All of our maps involve capture points and winning by achieving a higher score than the opposing team. Secondary scoring mechanics often involve other factors such as killing NPCs.

We plan to release more maps after we ship, and it is possible that those maps will contain new primary mechanics, but of course we won’t know until we’ve had time to design them post-launch.

As I mentioned before, we will definitely have automated tournaments which we believe will satisfy the needs of organized 5 person parties who want to play against other 5 person parties.

Our basic PvP game system already facilitates pick-up groups fighting against each other, and we are working on adding features to it that make it easier for players who are partied with each other to join the same game.

About PvE, you can spend a lot of time in each area just by fulfilling achievements, completing events, that change depending on the time or other events' progression, so eventually you will reach higher level than intended for that area, but:

Do you even plan to do something about it, as in fitting the content to the character's level?

We actually do the opposite of this and fit the character’s level to the content they are doing. In PvE we do this downward so that players can spend as much time as they like in whatever area they are in.

Should players move to the next area as soon as possible to keep leveling in a fast pace or can they still get experience while completing lower level events?

We’ve tried to make Guild Wars 2 a game where experience level isn’t looked at as the goal of the game and reaching max level isn’t where the game really begins. We have a lot of mechanics in place to reinforce these ideals so we hope players are able to slow down a bit and enjoy the journey.

Do you get something out of completing all achievements and events of a specific area? Maybe a title or a cosmetic reward?

We also have a series of things that a player can discover in each map which will earn them “map complete.” Achieving map complete for a given map earns you gold, XP, and loot.

And finally: game mechanics. We've played all professions and there are a lot of common skill types among them, crowd control, area of effect damage, and evasion/blocking that balance PvP (depending on choices of course, but they are there), but we realized that there are classes that can access to several skills during combat while others have less choices while fighting.

Are there plans to change some of this mechanics prior to release?

We have no concrete plans to change the way any of our core mechanics work before release, but we are always reacting to player feedback and data from our own internal testing, so it’s possible that we could change some things based on feedback.

If you left an event half-done (for example you killed 10 out of 20 wolves that were attacking a farm) and you get back let's say, in a month, will the game stores your progression and save you half the time? if no is there a time limit for that?

If you log out or are disconnected during an event, you will be able to gain participation credit for that event as long as you log back in before the event ends.

In any case, would you like to add something?

I’d like to thank all of our fans for their patience and support these last five years. It’s been a long journey, and all of the support we’ve gotten from our fan base has been one of the things that’s made it worthwhile.

This entry was posted on Friday, May 25th, 2012 at 5:53 pm and is filed under MMO News. You can follow any responses to this entry through the RSS 2.0 feed. You can skip to the end and leave a response. Pinging is currently not allowed.