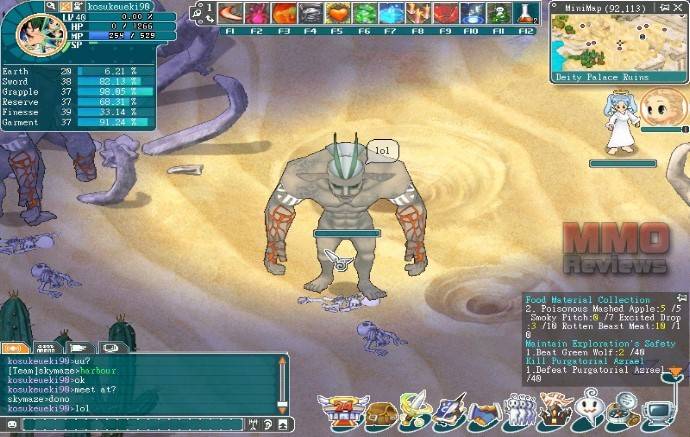 Long, long ago, there was no difference between heaven and the human world. Every corner was filled with happiness, until one day something unexpected happened. The archangel Lucifer fell in love with a girl. However, this girl was already in love with another angel. Jealousy consumed Lucifer until he lost his mind and used his powers to transmute the girl into dew and the angel into starlight in order to separate the two lovers forever.

Lucifer knew he would be punished sooner or later, so he gathered a rebellious army and attempted to overthrow the reign of God. Afterwards, Lucifer and his rebel army failed and were expelled to Hell. Ever since Lucifer was expelled to hell he has been planning his revenge. Now he is expanding his evil forces and has founded a demon-training camp, with his purpose being to destroy the Garden of Eden. Even worse, Lucifer believes now is the right time to take his revenge on God.

Angels Online grasps the eternal idea of Good and Evil or Heaven and Hell and cleverly puts it in a manga-like game.

- Variety of weapons and magics.

- Factions: Eden is divided into four factions and each of these factions has its own city to protect: So, we have Aurora faction with Aurora City, Shadow faction with Dark City, Beast faction with Breeze Jungle and Steel faction with Iron Castle.

- Skills: In Angels Online you can choose a class and according to this class you will be given some skills. These skills can change at any time, with or without a cost (up to level 20 it’s totally free).

- Pets: And now that I mentioned pets, there’s a pet system in the game. When you have the money, you can buy a pet. These pets can be water, fire, wind and earth elves, which of course at first they’re in the form of an egg. There are also the brute, beast and nature eggs that can be obtained from monsters, but these are pretty difficult to get.

When you begin the game and after you complete your character, you will go to Angels Lyceum, which is actually a very cleverly designed tutorial. Here, you have to evolve from a little apprentice angel into at least a graduate angel. At the end of Angels Lyceum, you have two choices: to either ask for graduation when you have 5 credits or try to be an excellent student after gathering 15 credits and completing a pretty difficult quest.